In Appalachia, we begin by trading nightmarish mountaintop removal coal-mining, for an afternoon breeze...

(Cross-posted at the Appalachian Voices blog)

As America awakes to the effects that our energy production and consumption is having on the globe, people are shocked to find out that we do things like blow up 100s of 1000s of acres in our own mountains for a just little bit of coal. One of the most agreed upon tenets among those of us working for sustainable energy policy is that "there is no silver bullet" as far as alternative energy. Another words, it isn't feasible to run everything in the United States off just solar, just wind, or just hydro power. I adhere to this belief. America will need to localize our energy solutions in order to create the sustainable, clean, stable, domestic energy policy that everyone wants and needs.

America currently gets more than half of her energy from coal. Appalachian coal features prominently in this production, though our role is decreasingly important... 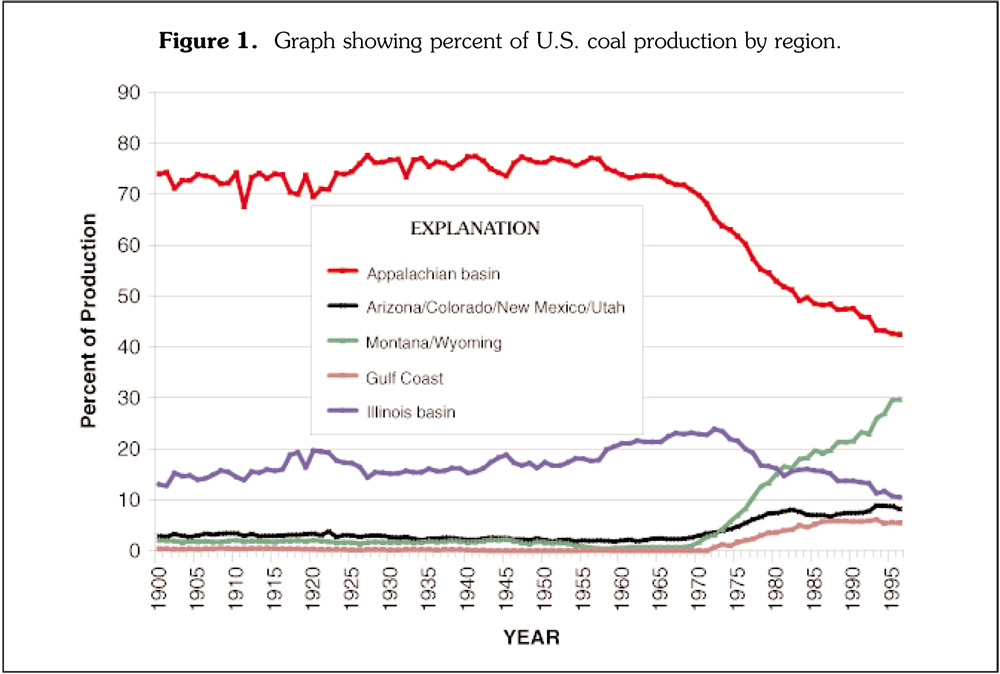 Appalachian coal currently produces roughly 15% of America's total energy needs. 10% of that coal comes from deep mining and 5% is from surface mining and mountaintop removal.

MTR coal mostly comes from West Virginia (95.6mst) and Kentucky (92.4mst) . However, other than West Virginia herself, North Carolina gets more of our energy from MTR coal than any other state - a whopping 12.2%!

Thing is...we're 'bout out of coal.
The US Geological survey estimates...

“In the northern and central Appalachian Basin coal regions…Sufficient high-quality, thick, bituminous resources remain in these beds and coal zones to last for the next one or two decades at current production.”

Over 750,000 acres of Appalachia have already been destroyed, and the EPA estimates the practice of mountaintop removal will DOUBLE in the next decade. Here is what is permitted circa 2005. 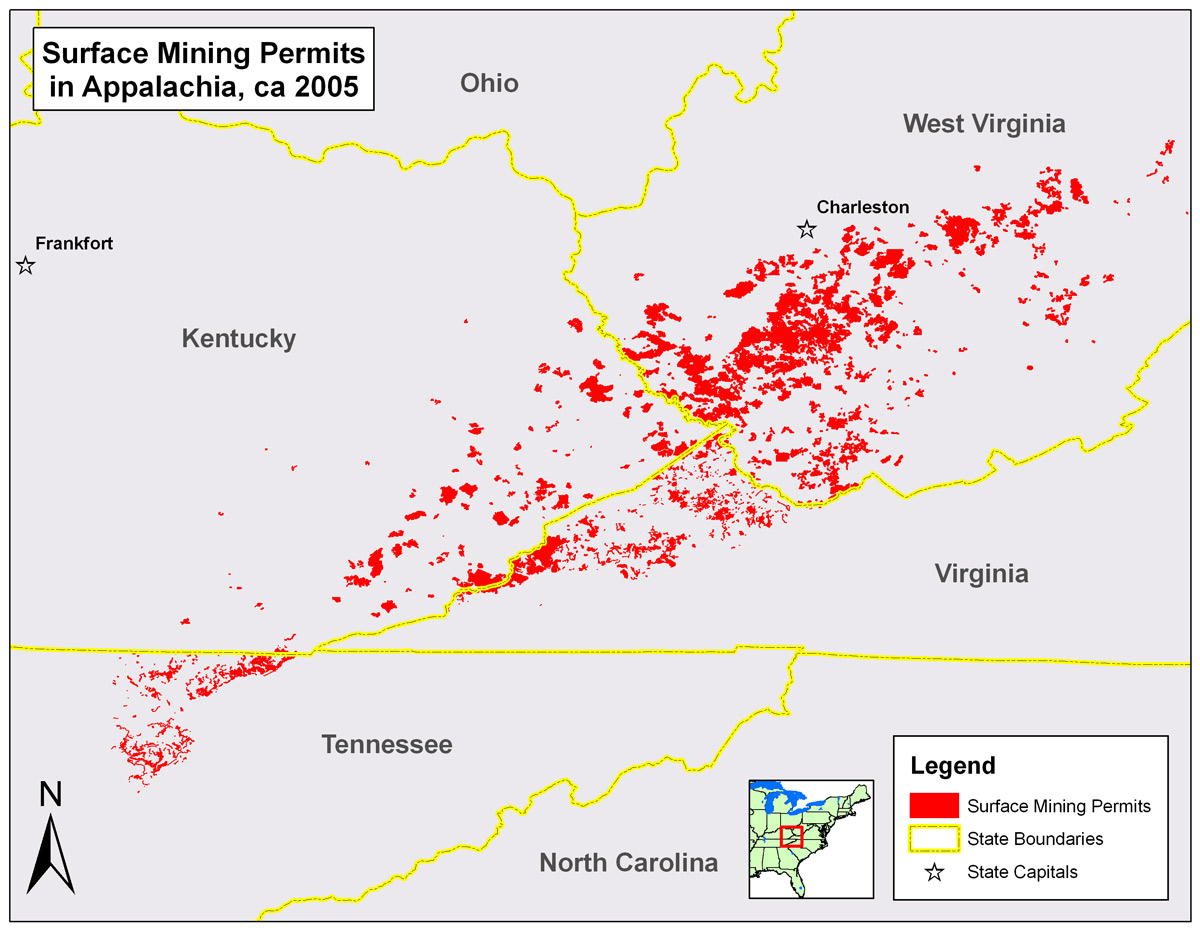 Coal companies are increasingly relying on the mountaintop removal method, in which up to 1000 ft. of local relief is blasted away, and shoved into the adjacent river valley, in order to get at the coal seams beneath the ground.

Coal companies prefer this method because it employs less people. 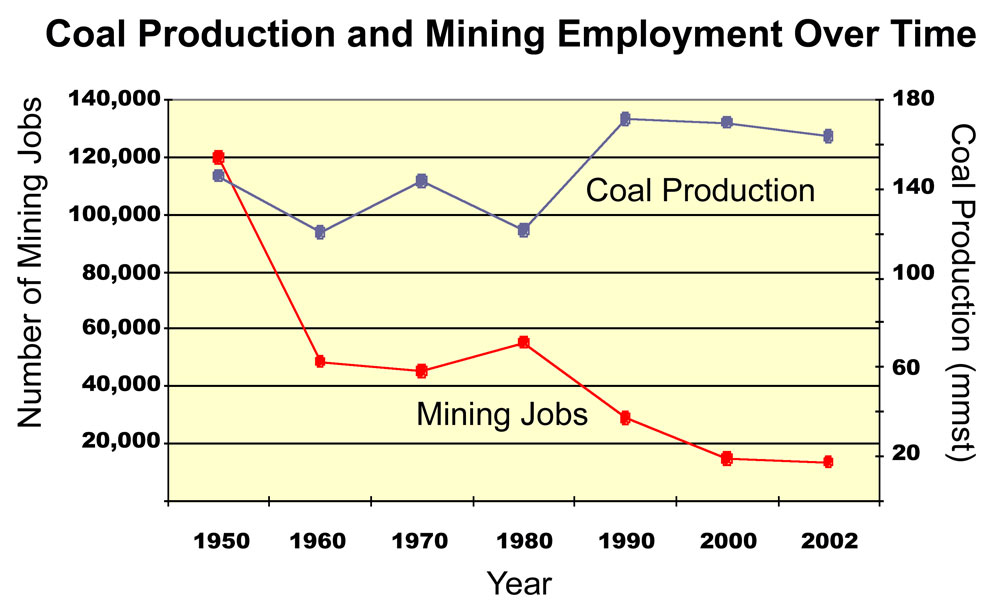 Appalachia and its people are resourceful in every sense of the word. The most bio-diverse temperate hardwood forests in the world blanket our mountains, which have lost over 6 kilometers in height over millions of years of natural erosion and weathering. Roughneck settlers came here 100s of years ago, before there was ever interest in the black rock beneath their feet. Now, the mountains are being flattened, the trees and peaks are being shoved into the river valleys, habitats are being destroyed. In one man's humble opinion - we are destroying the most beautiful place on earth for just a few measly years of coal. You can only burn coal one time. And then it’s gone!

The question isn’t whether or not we need to replace and rebuild Appalachia’s mountaintop removal/coal based economic sectors. It MUST happen and it needs to happen NOW. The question is can we realistically replace that 5% of America’s energy needs with something more sustainable? Can Appalachian wind power help create Appalachia and America’s new domestic energy economy?

Well, here’s how we hillbillies see it...
Some years back, here in western North Carolina, someone must have been pleasantly surprised to come upon these images...

Perhaps it was someone from my home county of Watauga...

With darker shades of blue showing a higher wind energy potential, it should be obvious to any 3 –year-old that Appalachia is a PRIME spot for a regional economy based on wind power.

A recent study carried out by the New York State Energy Research and Development Authority (NYSERDA) estimates that mountainous regions (similar to southern WV) can likely support an average of at least one turbine every 26 acres.

Compare that to the current situation in Wise County Virginia, where roughly ¼ of all land area is permitted to be strip mined, and you understand that (an average of) 1 turbine/26 acres has much less impact on the land, the views, the habitats, and the people of the region.

This implies that 1 million acres of land could support roughly 38,000 turbines that annually produce 3-4% of total US electric demand. The actual footprint of these turbines would be roughly 10,000 acres, leaving a surrounding 990,000 acres of untouched forested land.

That is 3-4% of America’s energy from sustainable sources WITHOUT destroying the very earth that we live upon. Once an area has been hit with mountaintop removal, it is also no longer an economically viable source for wind energy.

The most efficient use of Appalachian land likely merits the discontinuation of MTR coupled with the development of mountain based wind farms. If this occurs, over the next 10 years coal companies could continue to provide the energy required to meet at least 13-14% of US electric demand via wind turbines and deep mining. In addition, if coal companies chose this path as opposed to MTR, 10 years down the road they will be left with close to 1,000,000 acres of forested land suitable for economic development that also supplies 3-4% of US electric demand in perpetuity.

We have begun taking the issue into our own hands. In Watauga County North Carolina, the County Commission just became the first regulate wind power systems in the state of North Carolina. This is a very rural, typically conservative county, and it was a VERY popular move.

Some comrades and I just finished this short amateur tongue-in-cheek video about wind energy production in western North Carolina. I hope you enjoy it, and I hope it helps to initiates substantive conversation in this part of the country about how we are going to lead the way into a sustainable local economy, and a country with stable domestic energy production

I also hope that y’all are considering what is going on in your neck of the woods that is going to keep your economy strong and energy production sustainable and local.

I hope yall all saw the Kos post about the 50-state-strategy and western NC where he mentions, among others, my beloved Watauga. :)

Please please please keep us informed about what you're doing and let us know what we can do to help.

This story about Microsoft's irresponsible corporate behavior should be enough to wake people up to alternatives.

Thanks for sharing this. It's so great to see alternative energy talk and research being turned into real energy people can use. Watauga is proving that even local Gov't has a very important role to play in all this. I saw micro-hydroturbines in action at Festival on the Eno a few years back, and there's now a BioDiesel plant in Chatham county. Exciting times. :)