Be extremely careful of the information you share on social media:

The intelligence warning on Friday did not accuse the Chinese of trying to hack the vote; instead it said they were using their influence “to shape the policy environment in the United States” and to pressure politicians “it views as opposed to China’s interests.”

Russia, the warning said, was continuing to “spread disinformation in the U.S. that is designed to undermine confidence in our democratic process,” and it described Iran as an emerging actor in election interference, seeking to spread disinformation and “recirculating anti-U.S. content.”

Guarding against being involuntarily manipulated by these operations is even harder than it was four years ago. Their process has evolved, their skills have been sharpened, and their work will circulate into your orbit at one time or another. And our own strong desire to expose and fix corrupted elements of our society will be used against us, if they can. But we need more information about these developments, some specific examples of such, and the intelligence community's innate desire to keep these things secret is causing a rift between them and Congress:

Mr. Evanina’s statement, said the four Democrats, who earlier called on the F.B.I. to give a briefing on disinformation campaigns to the entire Congress, “does not go nearly far enough in arming the American people with the knowledge they need about how foreign powers are seeking to influence our political process.”

Their letter was particularly critical of the description of Russian activity, the most politically delicate topic because of President Trump’s own unwillingness to acknowledge Russia’s actions four years ago. The Democrats wrote that “to say without more, for example, that Russia seeks to denigrate what it sees as an anti-Russia ‘establishment’ in America is so generic as to be almost meaningless.”

Mr. Schiff, who is the chairman of the House Intelligence Committee, said Friday on MSNBC that he had been “urging Bill Evanina and others in the intelligence community to level with the American people about what’s going on.” He said the warning gave “a false sense of equivalence between what Russia is doing, what China is doing, what Iran is doing.”

Mr. Schiff and the other three authors of the letter have been briefed extensively on the intelligence, and thus are prohibited from violating classification rules by describing what they have seen.

And that must be frustrating as hell; to know about these specific issues and not be able to share them with the targets, the people themselves. We've got a little over three months until the election, but early and absentee-by-mail voting begins sooner than that. We don't have the luxury of a months-long investigation that will only tell us what to watch out for after the election concludes, we need that information now. But at least in the case of the Russian meddling, Trump likely wants that to be quashed until January, if not later.

One encouraging development is the exponential growth of people planning to vote by mail. 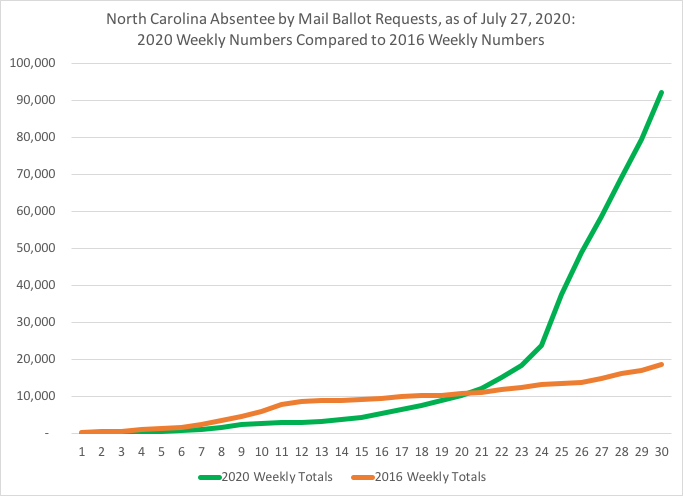 For more on this trend, see Old North State Politics