Climate models had predicted that the heat content of the oceans would rise faster than the data were showing. A recent correction of the data set revealed that sea levels and oceanic heat content were rising 50% faster than previously determined.

The oceans have been growing warmer and sea levels have been rising at a faster rate than previously estimated, researchers reported. A review of millions of measurements over the past four decades revealed a subtle error, they said; after correcting it, they found that sea levels rose two inches from 1961 to 2003 — about 50 percent greater than previous estimates. Experts familiar with the work said the finding, published in the journal Nature, added credence to computer simulations predicting centuries of rising seas from human-caused global warming.

There are different methods of determining oceanic water temperatures. Investigators found that one sampling technique that was used more from 1970 - 1985 than it's used today had a warm bias.

In particular, analysis (or here) of the XBT data showed that it was biased warm compared to the CTDs, and that this bias changed over time, and was dependent on the kind of XBT used (deep versus shallow). .

The warming water is contributing to rising global seal level. 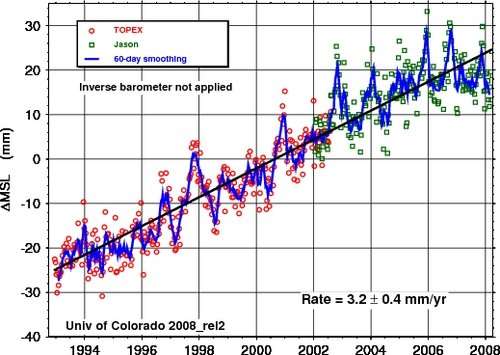 Sea level and temperatures are not rising evenly. Since the large El Nino of 1997-1998 oceanic heat content has been transferred from the tropical Pacific to the Indian and Atlantic Oceans. Sea level rise has also not been uniform. The La Nina of 2007 increased Pacific trade winds raising sea levels in the Philippines, the southern hemisphere subtropics and the tropical Indian ocean.

The sea level anomalies are increasing the flow of water across the equator in the Atlantic Ocean, contributing to the warming of the tropical North Atlantic. Since 2003 the tropical warm pool that supports major hurricanes has grown and deepened significantly.

The increasing heat content of the tropical and subtropical west Atlantic can be seen easily by profiling temperatures at the 100 meter contour. This profile is made with the help of satellite altimetry. Here's the 100 meter profile for 2003. 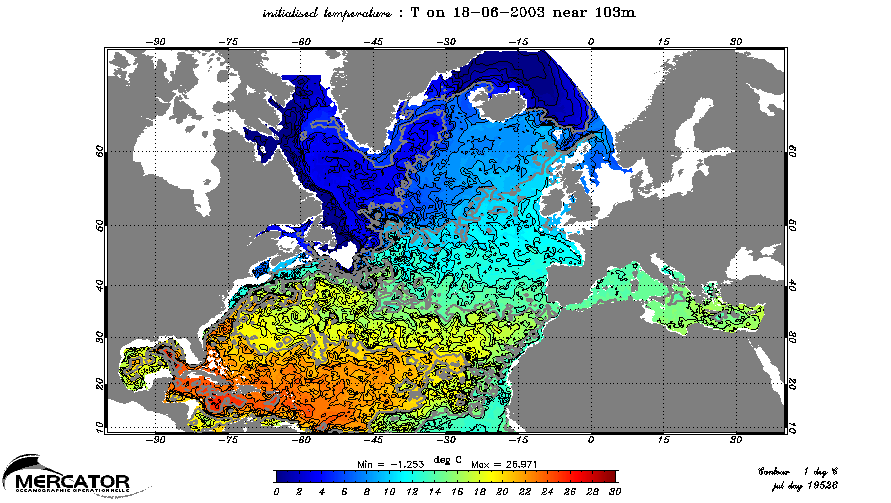 In 2005 the sea surface temperatures of tropical Atlantic were exceptionally hot. The warm water was also exceptionally deep in the Caribbean and in the tropics north of South America. 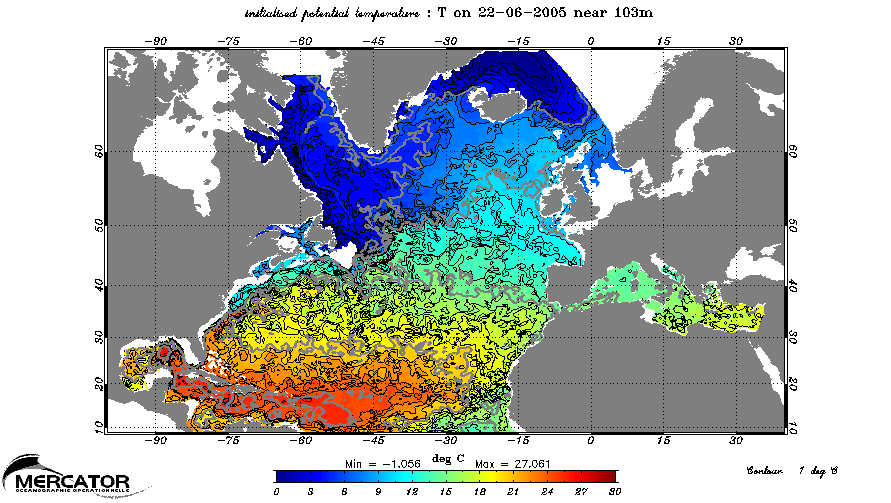 The west Atlantic warm pool has continued to warm at 100 meters depth. It has moved north some, cooling the souther Caribbean Sea, while warming the Atlantic Ocean off of the southeastern United States.

By Mercator Ocean
However, sea surface temperatures have dropped in the tropical North Atlantic south of 20N since the record hurricane season of 2005. These lower temperatures in the region where many hurricanes form will tend to reduce the number of storms this year compared to 2005. 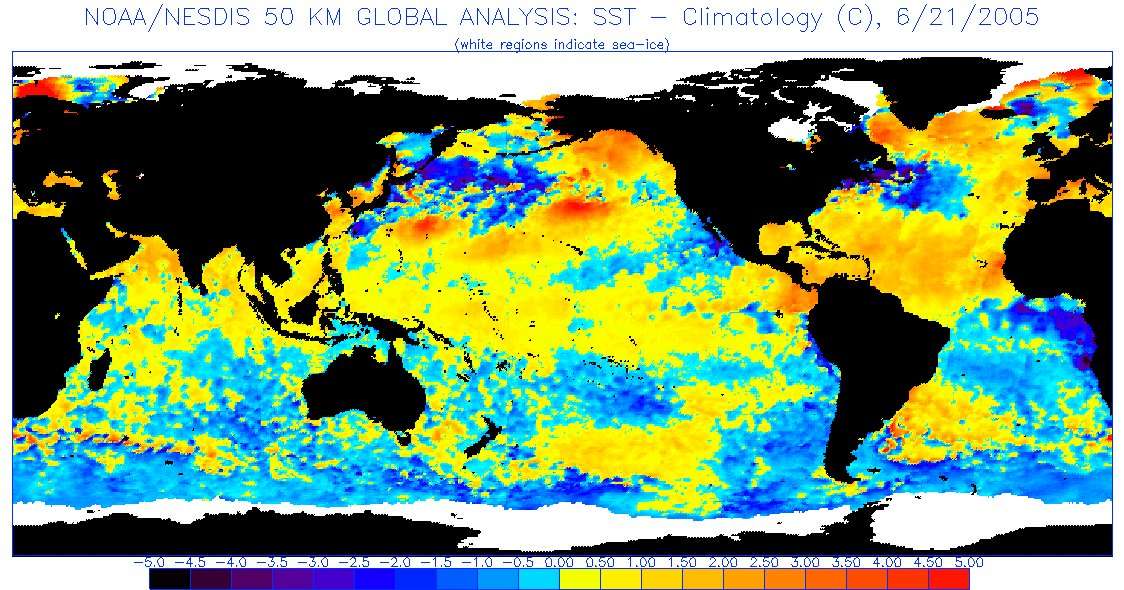 La Nina, stronger trade winds, and more Saharan dust than the very low dust year of 2005 have all contributed to the reduced tropical sea surface temperatures. A weak El Nino in 2006 contributed to wind shear in the hurricane season, causing forecasts that year to over forecast hurricane activity. The hurricane season of 2005 was exceptional because multiple factors were favorable for hurricane formation and development. 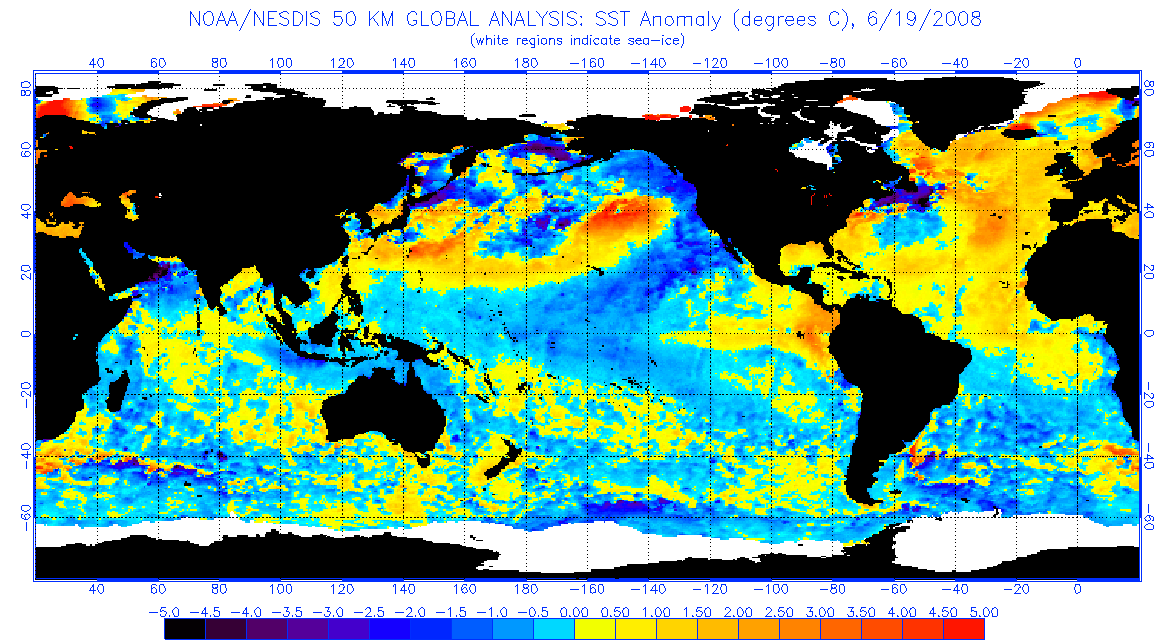 Upper atmospheric winds are generally unfavorable for Atlantic tropical storm formation in June, but this year sea surface temperatures could already support a major hurricane on the east coast as far north as the Virginia capes. 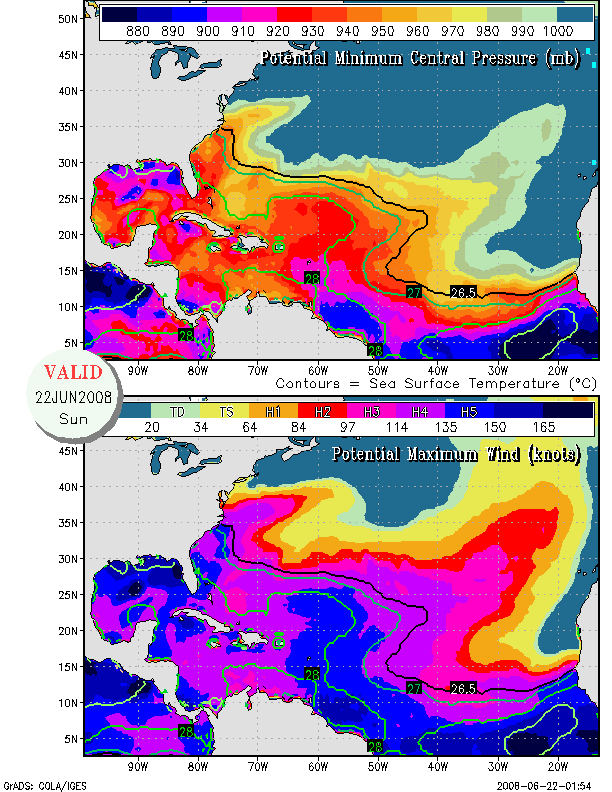 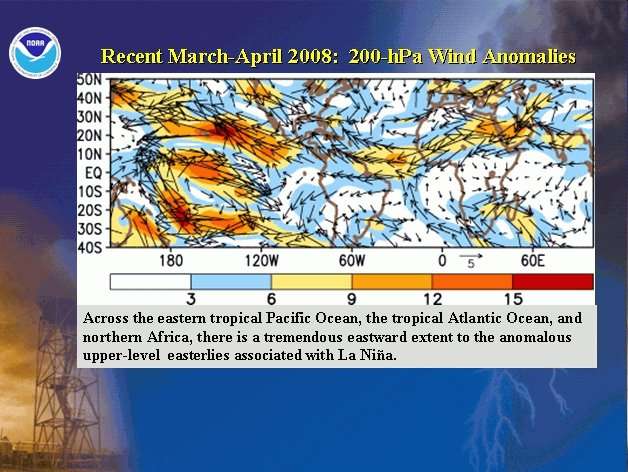 Saharan dust levels are forecast to be slightly below normal this hurricane season. Note that 2005 had exceptionally low levels of dust.

Additionally, the air pressure in the tropical Atlantic has been lower than normal for months (see CSU PDF) and is forecast by the NHC to continue to be lower than normal in the peak of hurricane season. Low pressure is favorable for tropical storm formation and development. 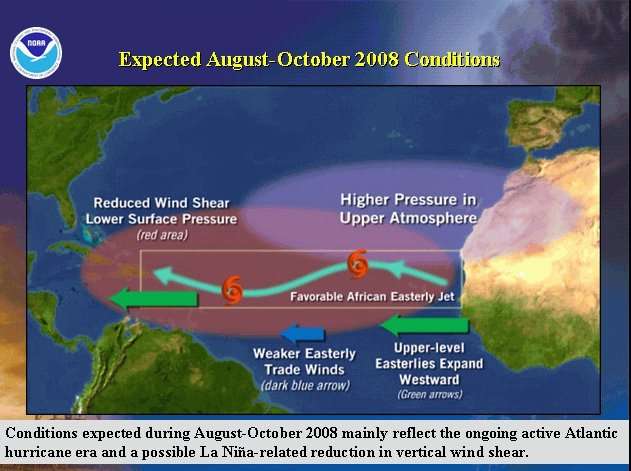 CSU's objective April forecast method predicted 18 named storms but they adjusted that number downward based on analog years. I think that the general warming of the north Atlantic gives the analog approach a low bias. I think that they should have stuck with the objective forecast of 18 named storms because the subjective analysis did not improve it.

Based on the many favorable factors for hurricane formation and development, I prefer the top end of the Climate Prediction Center's predicted range. Many things can happen to make a long range hurricane forecast fail so no prediction can be made with high confidence. 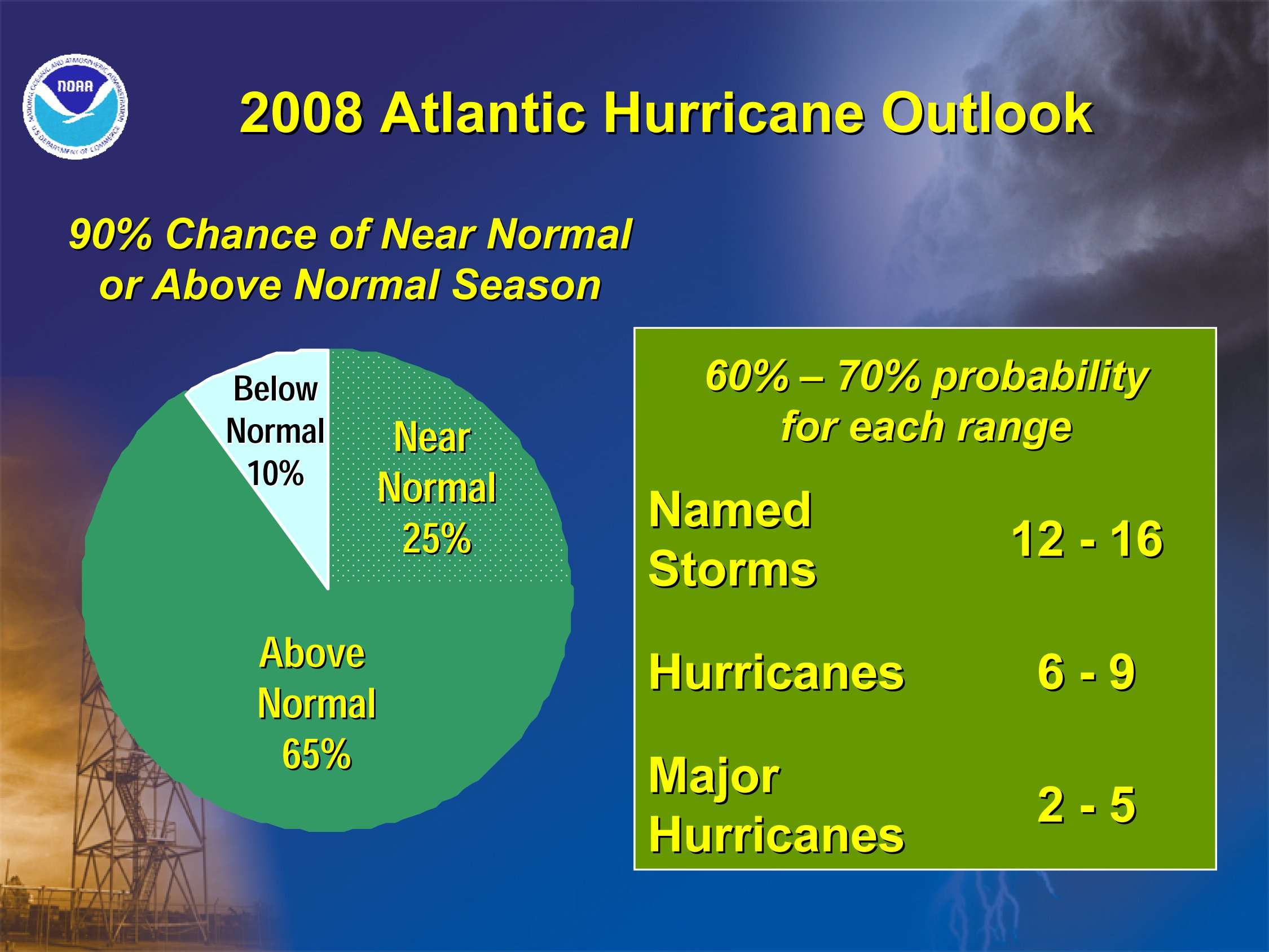 My best guess for this year's tropical storm season is:

My forecast of the coming hurricane season is not important.

What's important to know is:

The high heat oceanic heat content in both the Gulf of Mexico and in the Atlantic off the east coast will support intense hurricane development this year. There is a higher than normal risk of major hurricane landfall on the east coast of the United States.

Residents of the Atlantic Coast region, from Florida to Cape Cod, should be prepared for landfall of a major hurricane this year.

Residents of the Gulf coast region should be prepared every year. They are vulnerable even in weak hurricane seasons.

North Carolina has a much higher risk than normal of major hurricane landfall this year.

Thanks, Fish. Just what I needed.

to connecting the dots as well as you have in this post. Excellent work.

I guess the bad news could be that we might have to kiss Miami, Charleston or Wilmington goodbye.

The upside might be that after a decade or so of this aspect of the "hypothetical imaginings of rabib conservationists", going to the beach will entail a much shorter drive.

I don't foresee any large cities disappearing but conditions around Florida might be able to produce another cat 5 like Andrew.

It's all a matter of luck or lack of it.

Weren't we supposed ot get pounded last year too? We didn't get squat.

The skill of hurricane season forecasts is low. There are many factors that can cause them to fail.

We got a pretty good swell on the outer banks when a hurricane came pretty close, then went extratropical. I was there when the weakened remnants crossed over Hatteras.

Last year there were 3 good tropical storm swells here that I got out into.

take a direct hit. We being the USA. That doesn't mean they weren't out there. The Yucatan got pounded.

The Atlantic season of 2007 produced 15 named storms including 7 hurricanes. For the most part, stearing winds kept them either out at sea or aimed at Central America.