We waited outside for hours, finally got in, and wound up going right back outside...but it turned out to be one of the most exciting things that has ever happened to me. We were close enough to the next President of the United States to count the stripes on the ubiquitous flag pin he has been coerced into wearing.

It was a beautiful day in Fayetteville, a nearly cloudless sky, and the air had that bite to it that makes you think of apples and falling leaves. A crowd of more than 12,000 people gathered at the Crown Coliseum for one more chance to see "That One" before he becomes The President of the United States.

The volunteers worked hard to control the line movement, but there were not enough of them, so the line that was supposed to move in Disney-World "S" fashion instead became a disorderly amorphous mass of humanity - high spirited, mostly good humored, but disorderly nonetheless. (I swear, I didn't do a thing.) People who had been waiting in line for hours (like us) watched as people arriving right before the doors opened walked right in ahead of us because they joined the line where ever they wanted to instead of going to the back of the line.

As we waited, we were thrilled to see the Obama plane (Air Force THAT ONE) fly over the Coliseum. 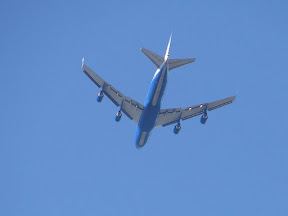 So you can imagine the disappointment we felt, after finally reaching the metal detectors at the gate, we were stopped. We waited about 20 minutes, hoping that the Secret Service, the Transportation Safety folks (who were doing the screening), or the Cumberland Co. sheriff's Dept. would tell us to empty our pockets and come on through the gate.

"Hold on - we're working on something, and you're going to like it," a TSA officer told several of us. After being in line for several hours, and feeling, as they say, the fierce urgency of pee (h/t Christopher), I couldn't think of anything that would make me happier than getting to a ladies room.

Eventually, we were told that the Fire Marshall would not allow any more people inside the building. (OK - remember, people had cut in front of us. I was a little ticked off.) Until we were allowed to proceed through the metal detectors and wanded (Did you know that under-wire bras will set those things off? Dang!) We were then led right back outside.

And set up outside was a makeshift podium that was about 15 feet from where we wound up standing. In about 30 minutes, out walks That One himself.

It was a short speech. He apologized for not being to get everyone inside, and then urged everyone to vote. Early vote. Cumberland County had all of their one-stop voting sites open today, which was brilliant, I think. I was amazed at how many people in the crowd had already voted. But Barack Obama reminded everyone that EVERYONE who is eligible needs to vote. So, Get Out the VOTE. Also, he will bring jobs to NC.

When he finished speaking, he "worked the line" as they say. The press of the crowd around me was so strong that at one point, I was literally lifted off of my own feet. I was next to another woman about my height. I don't know who she was, but she was lifted at the same time. We just grabbed each other's hands and held on. It was a little scary.

Fortunately, the rest of my family is taller, and the pictures I'm using here were taken by Grace. I'm going to try to embed a slide show here. If it doesn't work, I'll link the album for all of the pictures.

And if you have already voted, take someone else to vote. Make some phone calls. Knock on some doors. Do something.

I like it. Wish I could have joined you. Great story though.

on his flag pin? In one of the pictures, you see a very pale hand reaching for Obama. That would be my very "cool" son, who, like the rest of us, was thrilled to be so close the the one - that one - who is going to be the next president of the US.

I estimate that at its peak, there were probably 18,000 people in the crowd, because the Center held 12,000, and there were at least 6,000 behind us when we were stopped at the gate.

Jeebus I'll bet he's excited about November 4th! I know I am.

In 6 weeks of college. Of course he knows more than his parents, now. (He probably does.) I've caught him reading here a few times. He's mouthier than me, so I'm waiting to see if a new poster shows up whose writing style seems strangely familiar to me. :)

He was glad to be able to go to the early voting place while he was home so that he could vote for Tony Berk. Tony has coached him all through debate, and is one of his personal heroes.

Something somewhat similar happened to me. I arranged via Mr. Meek a few "seats" at the Greensboro Obama-Biden rally. Little did I know that we would be right there at the stage.

I was very excited that my SO got to meet the Senator in person and get her picture with him, and that one of my very good friends, an Army wife, got to introduce the Senator (very amusing to see clips of her on FOX News). I don't think any of us would have even dreamed six months ago that any of us would be in the positions we were in on Sunday. That's why anyone who thinks that only "bigwigs" get anywhere in the Party and in politics are more than welcome to come talk with me anytime. Trust me...if you want to go forward in the Democratic Party, all I have to say is, "Yes, you can."

We checked out one voting site later in the afternoon. The crowd had tapered off when we got there, but we were told it was packed earlier in the day. I'm so glad we had 5 early voting sites operating for our only day of Sunday voting in Cumberland (two were added at only a few days prior). We were a little worried that the Obama rally would actually HURT turnout (our only day of Sunday voting and everyone goes to a rally!), but I think everything worked out in the end.

I'm amused by some GOP complaints about the two extra voting sites that were opened on Sunday. For one thing, any reports that they were "next to the Obama rally" is utterly ridiculous...nothing in Fayetteville is ever NEAR anything else (that sentence may not make sense if you don't live here...driving from my apt to downtown might as well be me driving to another town). For another thing, is the basis of their complaint that MORE people are getting access to voting? Should the headline be "GOP Lambasts Increasing Democracy!" Are they for it in Iraq, but against it in the US? We don't even have to shoot a rifle to do this!

Anyway, it's great. And I know I'm supposed to be a partisan, but my first thought is always to increase voter participation. If 100% of people vote, and the Republicans win...fair enough, that's the will of the people. So if the GOPers trust in their candidates and their message, why are they afraid of increasing voting opportunities?? Indeed, I think the answer is left unsaid and understood.

microphone stand they set up outside, I was happy. (I was a little disappointed about not having access to a bathroom, however.)

I heard that Army wife's introduction - and how very weird it must be to see her on Fox news. I'll have to check that out. I figured you were there. I should have hit you up for VIP tickets, you bigwig. :)

We got what we wanted - a chance to see Obama again before election day. It's silly. I wanted to tell him.

I already voted for you!

I did tell him, but I don't think he heard me. It was more like a mosh pit than, well, a mosh pit. People just reaching for him. It was a wonderful day.

like that. It was rainy/hot when I went to see him in Greensboro but I wouldn't have missed it for anything. Great pictures!

Thanks for sharing it.