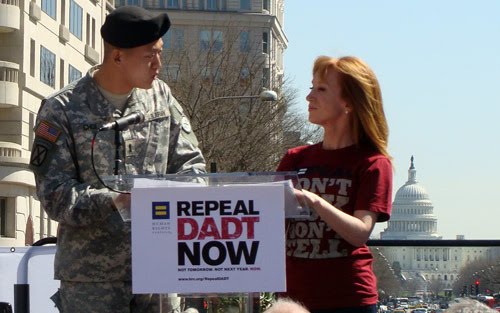 For those fans of West Wing out there, you may recall that President Bartlett, when finishing a contentious issue or rallying the troops for a hard vote, would follow it up with those ominous words: "What's Next?" Right now and until that vote is cast and the legislation is signed into law we need to give health care reform our all. But the moment it is signed, we also need to look at what's next. And I'm asking for your help to make sure that is Don't Ask Don't Tell repeal. The time has come to take this next step towards equality, but it'll only happen if we take it together.

Make sure Kay Hagan, a member of the Senate Armed Services Committee, knows where you stand on DADT repeal:
Please give her a call: 202-224-6342. And shoot her a message: http://hagan.senate.gov/contact/

News coverage, many pictures, and civil disobedience beyond the fold...

Earlier this weekend we saw the second round of DADT repeal hearings. 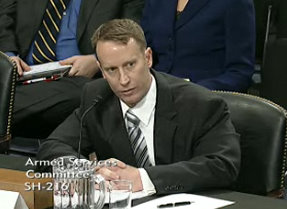 We saw the Servicemembers Legal Defense Network, a national organization devoted to assisting those affected by DADT, host a national event. 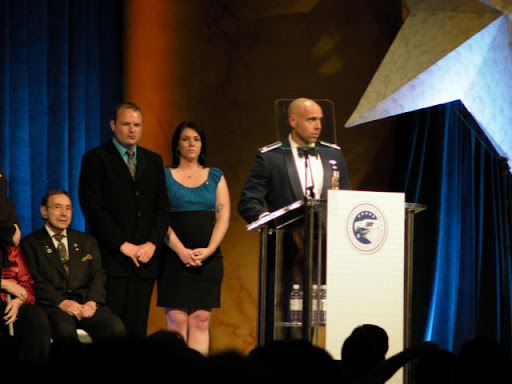 Lieutenant Colonel Fehrenbach, the now outed 18-year combat aviator whose training cost 25 million, is pictured speaking here. Congressman Murphy, first veteran of the Iraq War to serve in Congress, and a leader on DADT repeal is a part of the event.

We saw those standing up for Equality & for ENDA being arrested for peaceful civil disobedience.

And we saw Lt. Dan Choi and Captain Jim Pietrangelo arrested for their peaceful civil disobedience. 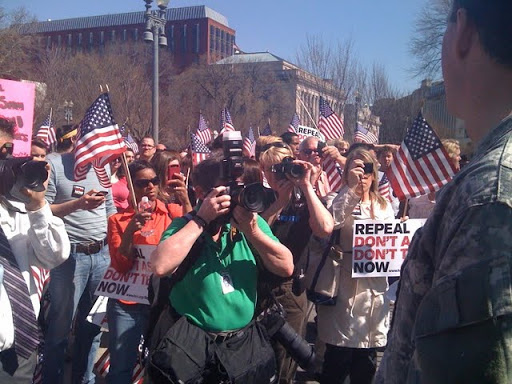 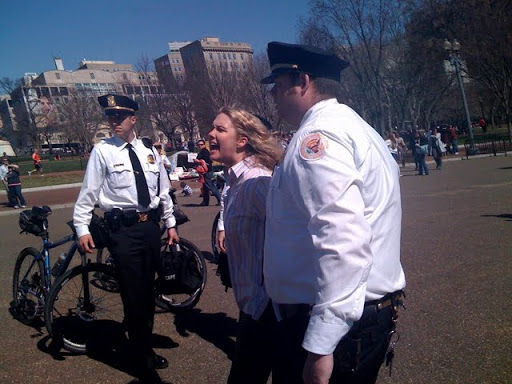 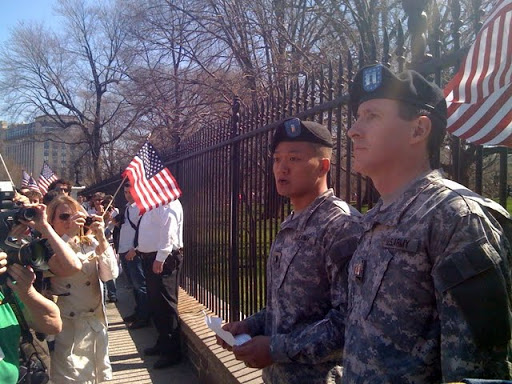 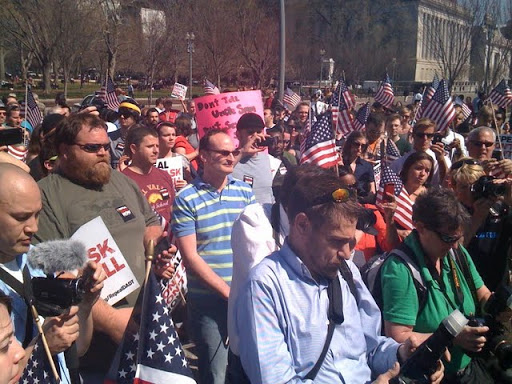 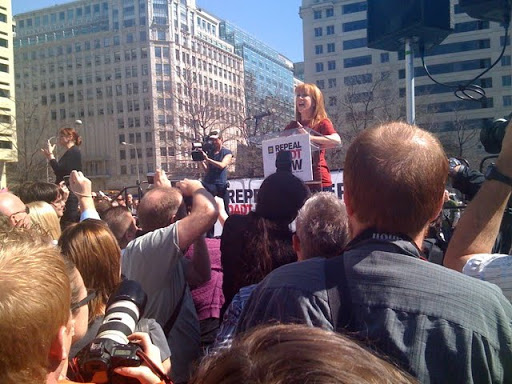 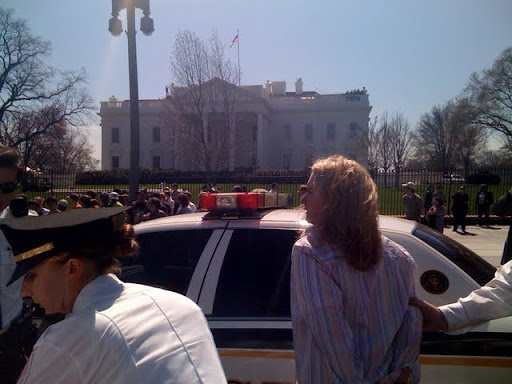 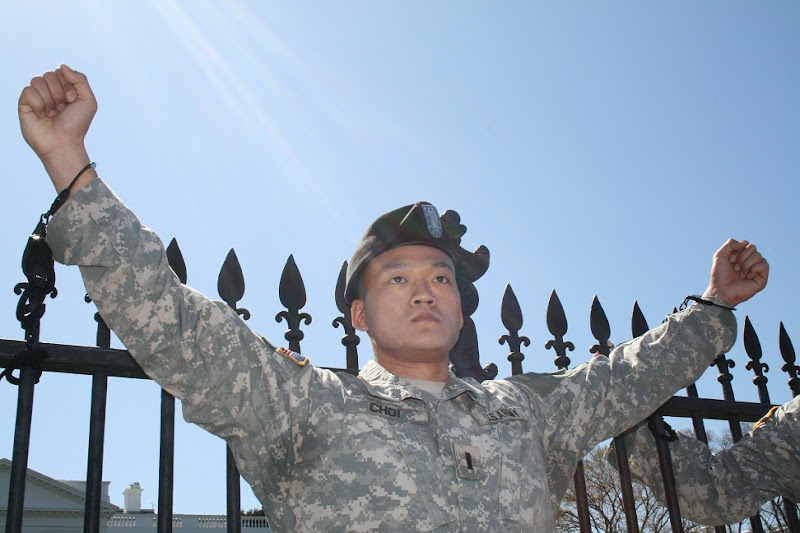 Choi's plea: I'm not ashamed, I'm not finished. Not guilty. He'll now have to head to trial.

As you may recall, the first round of DADT hearings also proved to happen during an active time period of lgbt civil rights struggles, with the national equality march. And although you might not have known it based on relative media coverage, it was larger than the tea party national march around that time.

General Colin Powell who served under Bush, Secretary of Defense Robert Gates who served under President Bush and President Obama, Admiral Michael Mullen the highest ranking officer in the United States armed forces, and General David Petraeus who obviously knows a little something about the current conflicts, all agree that DADT needs to be repealed. President Obama called for DADT repeal during his speech during the National Equality March weekend, and again during the state of the union saying "this year."

DADT repeal proves to have support in the polls, even in NC, where recent polling suggests 67% of democrats and 59% of independents support its repeal. And as luck would have it, we have a senator in this state that says she supports DADT repeal, and who even sits on the Senate Armed Services Committee! No more perfect storm of support on issue or rightness of the cause could occur, and yet, as I look through the list of those cosponsoring the repeal bill, I find her name no where on it.

Please give her a call: 202-224-6342
And shoot her a message: http://hagan.senate.gov/contact/
And remind her that inaction stretched too long becomes complicity.
And remind all your elected officials that this is what's next.

You are so right on this. I mean, just what in the world has been the hold up on repealing DADT anyway? The american people favor repealing it in majority, so it will not present anyone with some kind of political problem in getting re-elected (which seems to be the only thing our politicians care about anymore), we continue to see the highest levels of military leadership endorsing repealing DADT, the members of congress when polled favor repealing DADT in majority from BOTH parties...on and on we see reasons to repeal it yet we are being told that they need to do a two-year study on it?

I am like you, Jake. This should be "next up" in my view.

dropped in at the top of the post? A call to action graphic for the right sidebar would be welcome too.

it does look better this way. I didn't shrink the pic too much just to make the "Repeal DADT Now" sign easy to read, but I think it came out okay.

or sent a message.

I'd love to know how effective write ups like this are, and would appreciate anyone sharing that they made the call, or sent a message. Thanks!

Oh, I nearly forgot, one of my favorite pics from the SLDN event this weekend: 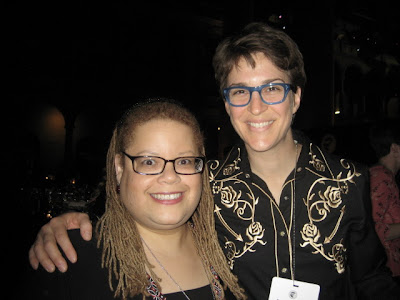 Pam Spaulding who is a poster here both on BlueNC & runs PamsHouseBlend.com with Rachel Maddow!

If the President can sign an Executive Order reinforcing the Hyde Amendment surely he can sign one putting an End to Don't Ask Don't Tell! But he want! Why who the Heck knows!

Fighting for Truth, Justice, Freedom and the American Way!

A little peaceful civil disobedience seems to be going a long way towards media coverage:

This Is My Mission’

Following his stint in jail for chaining himself to the White House gates, Lt. Dan Choi speaks about civil disobedience, gay rights, and how the Army made him a better activist.

A sit-in, in favor of DADT repeal, is being staged at Senator McCain's office.

At the event in that second video I posted last week, the President said these type actions should be targeted towards the GOP who oppose DADT repeal rather than the Democratic party that is in power. It looks like these civil disobedience minded folk are going to keep doing both, and that people are going to keep getting arrested every week or two until something changes. The organization is asking people to contact McCain's office to voice their support for ending the ban on gay and lesbian service members serving openly.

because of a sit-in to speak with Senator McCain about DADT repeal.

U.S. House Speaker Nancy Pelosi is planning to hold a vote this year in her chamber of Congress for “Don’t Ask, Don’t Tell” repeal, according to her office.

I know the President said repeal DADT this year at the State of the Union, but I'm glad to hear a leader in Congress saying it too.

The pressure is still being kept up on elected officials, not only with public arrests of servicemen and women or other DADT repeal supporters every week or so, but also by more direct attempts at lobbying the representatives:

There are other groups delivering tons of toy soldiers to elected officials offices as visual reminders while holding press conferences outside their offices to draw attention to the issue, there are are some organizing a letters to the president series from discharged servicemen and women. Even the American Bar Association has issued a press release yesterday calling for the repeal of DADT.

All these groups are pushing for DADT repeal to be a part of the Defense Authorization Bill, because 1) that is the only place it will pass, and 2) that is the same bill that created DADT

I'm borrowing a segment of a post with a time line from dailykos regarding the Defense Authorization Bill:
http://www.dailykos.com/story/2010/4/26/221556/513

WHY THE NEXT 30 DAYS IS A CRITICAL:
• Servicemember's Legal Defense Network and other coalition voices are urging the President to include repeal in the Administration's defense budget recommendations, but also to voice his support as we work to muster the 15 critical votes needed on the Senate Armed Services Committee to include repeal.

• The House and Senate Armed Services Committees will markup the Defense Authorization bill in a few short weeks.

• The Defense Authorization bill represents our best legislative vehicle to bringing repeal to the president's desk. It also was the same vehicle used to pass DADT in 1993.

LAYOUT FOR REPEAL / HOUSE AND SENATE TRACKS:
• Sen. Mark Udall told the Denver Post the committee was "within a vote or two" of including repeal in the Defense Authorization bill. Udall is a member of the Senate Armed Services Committee.

• Rep. Jared Polis, who holds a key position on the House Rules Committee, told the Denver Post he is willing to help insert a similar provision in the House version of the Defense Authorization bill with the help of Rep. Patrick Murphy, who is the lead sponsor of the House repeal bill.

• The Senate Armed Services Committee markup of the Defense Authorization bill is expected the week of May 26.

U.S. House Speaker Nancy Pelosi is planning to hold a vote this year in her chamber of Congress for “Don’t Ask, Don’t Tell” repeal, according to her office.

While it was great for the President to say he's aiming to have it repealed this year in the State of the Union, it is nice to hear it coming out of Congressional leadership too since they'll be voting on it.

"We all look forward to the report on the review of the ‘Don’t Ask, Don’t Tell’ policy by the Defense Department. In the meantime, the Administration should immediately place a moratorium on dismissals under this policy until the review has been completed and Congress has acted."

Pelosi has decided to go a step further than saying vote on repeal this year by calling on the President to end DADT dismissals until the repeal is official. She put this statement on her website on the eve of the next big protest at the White House. Some of the speakers for tomorrows protest will include Lt. Dan Choi, Capt. Jim Pietrangelo II, Lt. Robin Chaurasiya, Cpl. Evelyn Thomas, Spc. Jarrod Chlapowski, Maj. Mike Almy, Capt. Tanya Domi, Cpl. Brett Edward Stout, Sgt. Brian Fricke, and Sgt. Justin Elzie.

If the President followed Pelosi's advice it would effectively end DADT immediately. And then congress could follow up legislatively so that it couldn't be easily reinstated by the next president.

More people chained themselves the to White House fence today to keep the arrests every week thing going.