I have received a press release from the Kissell campaign and there is good news. He has received the endorsement of the AFL-CIO and the NCAE, the North Carolina Association of Educators.

While it isn't unexpected for a progressive to earn either endorsement it is a huge feather to receive it so early in the campaign. Both endorsements will probably be followed with PAC contributions to the campaign.

Kissell: "My campaign is on the move. In just a few months we've gone from an upstart grassroots campaign to a well oiled machine that is hitting on all eight cylinders."

Rest on the flip side...

When I argue politics with my Republican Dad, I focus on a position that he feels strongly about, which is Veterans care. He is a Vietnam vet and so I bash him over the head every time we talk about how Bush is slashing Veteran's benefits, refusing to give armor, paying mercs 100K to drive trucks full of "sailboat fuel", and anything else I can remember.

I never let him get the last word on these topics, I always leave him with a clear-cut image that Bush is against Veterans.

Then, I also tell him the latest Republican hypocrisy every time we meet. However, I think the thing that finally sunk the ship was this. He always says that Democrats are just as bad as Republicans, just as dirty, just as unethical, just as self-serving. I was in the car with him and we had the following conversation:

This just in by email from Mr. Jones:

Washington, D.C. - Third District Representative Walter B. Jones (R-NC) has joined Reps. Ric Keller (R-FL) and Ben Chandler (D-KY) and other lawmakers in voicing his strong opposition to the Administration's fiscal year 2007 budget proposal to sell 304,000 acres of national forest in 41 states in order to fund a five-year extension of the Secure Rural Schools and Community Self-Determination Act.

North Carolina's own State Government Radio. I don't even know what to say. 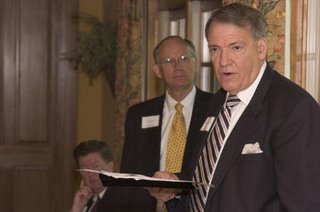 My mama and daddy were god-fearing Christians and loyal Republicans. They even dragged me along the golden path, arranging for me to get baptized early just in case I got killed being a goofball kid. I was nine at the time of my conversion. Despite their strong Christian beliefs, however, a bright thread of hypocrisy colored their world views. They were racist and homophobic to a fault. And no matter how hard I tried in later years to help them see the light, they believed Republicans walked on water, so to speak.

These are important action plans that have upcoming deadlines.

If you haven't taken action on these two items, today is the day to do it! Find out how below the fold