Prior to this year's Primary race for the 2nd Congressional District, Keith Crisco's name rarely came up here at BlueNC. But on the rare occasion that it did, he was "not treated well," to put it mildly. He had at least three strikes going against him: 1) he was viewed as part of the "old guard" of NC Dems who seemed to continually produce jail-bound embarrassments, 2) he served as a conduit for "business-friendly" policy proposals, which often did not serve the best interests of the majority of North Carolinians, and 3) he was both a cheerleader and manager of the wildly unpopular incentives program.

It's being reported on Twitter, but WRAL has the full story - Keith Crisco, who was Clay Aiken's opponent for the Democratic nomination in Congressional District 2, died in a fall at his home today. Crisco was trailing Aiken by 369 votes in the primary.

"This is a shocking day," Crone said. "I have known Keith for nearly 30 years and consider him a good friend. He has done a great deal for his community and his state. I will miss his insights and his wry sense of humor and his keen mind for math and statistics."

There's more than one way to skin a municipality:

Financial, environmental and educational issues will be at the top of the agenda when the General Assembly reconvenes Wednesday in Raleigh. The so-called short session traditionally is reserved for tweaking the state budget. This year legislators also will use the session to deal with timely issues from coal ash to education policy.

A bipartisan committee has recommended capping privilege licenses, a tax on businesses, at $100. While that may be good news for some businesses, the city of Greensboro expects to lose $1.3 million in revenue if the General Assembly adopts the change.

First off, all Legislative committees are "bi-partisan" in nature, with the majority party filling the majority of seats in each. The only way you can (or should) call a measure bi-partisan is if some members of the minority party vote with the majority. Don't know if this is one of them, but I'm looking. Second, the privilege tax didn't become an issue until the courts blinked on sweepstakes cafes. And now that tax is one of the only ways cities and towns can keep Internet gambling casinos from popping up on every corner: 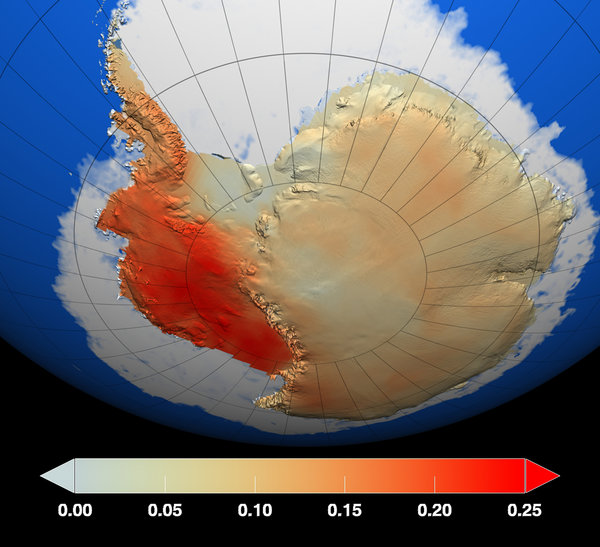 On the collapse of major ice sheets in Antarctica.

“This is really happening,” said Thomas P. Wagner, who runs NASA’s programs on polar ice and helped oversee some of the research. “There’s nothing to stop it now."

It's not like we haven't had time to alter the course of history, we've just chosen not to.

The new finding appears to be the fulfillment of a prediction made in 1978 by an eminent glaciologist, John H. Mercer of the Ohio State University. He outlined the uniquely vulnerable nature of the West Antarctic ice sheet and warned that the rapid human release of greenhouse gases posed “a threat of disaster.” He was assailed at the time, but in recent years scientists have been watching with growing concern as events have unfolded in much the way Dr. Mercer predicted. (He died in 1987.)

For those of you who have children or plan to, the reality of global sea-level rise should scare the hell out of you. In less than a hundred years, shorelines all around the world will be reshaped, leaving low-lying land submerged under at least 10 feet of water.

Via Greg Flynn, we learn of ABC's report that 4 NC lawmakers appear on the list of "duplicate" voters that the NC GOP has been railing about. You remember, NC joined the red-state coalition that uses bad data from Kansas's secretary of state, Kris Kobach, a leading vote suppressor, to attempt to show that voter fraud is rampant.

The legislature is coming back into session this week, triggering a new round of puff-pieces about Pat McCrory, Phil Berger, and Thom Tillis. Of the three, Berger is clearly the Big Man on Campus, with Tillis worried about running for Senate and Pat McCrory worried about being irrelevant. Boys and their egos ... same as it ever was.

Now, as lawmakers head back to Raleigh on Wednesday for their short session, McCrory promises to be more of a policy force. “We will probably be more assertive than in our first year, which I frankly thought was extremely assertive,” McCrory says. “We had a heck of a good first year, but now I think we can take even more initiatives.”

For future reference, Mayor Pat, don't use the word "probably" when you're talking about being more assertive. Kinda sends a mixed signal.

As the state legislature heads back in to session on Wednesday, the Winston-Salem Journal follows up on one of the new taxes passed by the Tea Baggers in the last session - the event ticket tax.

Some organizations, such as the Piedmont Opera, won't have to deal with the tax until next year - the tickets for their current season were already sold before the tax went into effect in January. Others - like the River Run Film Festival - have had to raise prices.