Please don't forget to go to One America Committee to vote for Larry. Voting ends today.

Most of you have heard about Larry Kissell's ingenius idea to sell gas at $1.22/gallon in RANT's great diary from yesterday. The results are in and it was an overwhelming success for many reasons. Yes, over 500 people were served. Yes, the news coverage has been terrific. Yes, the many different points represented by this gesture seem to all have been made quite successfully.

This is the mill Robin Hayes closed.

This is the bill the man couldn't pay
when he lost the job he'd had all his life
weaving cloth in the mill Robin Hayes closed.

This post was originally posted by RANT earlier this week. The snark is wonderful and deserves a bit more attention during the Saturday morning funnies. Thanks, RANT!

The Real Deal versus The Raw Deal

A reporter friend of mine just related the most interesting story about a Fourth of July parade she attended in her neighboring Montgomery County today.

TroyFest is apparently a big one -- a full blown, all-day street festival that begins with a parade showcasing Americana at it's finest... fire trucks, clowns, old timey cars and, of course, political candidates like Larry Kissell and Robin Hayes.

But Troy you see is in the 8th District. And that means two things these days - The town has lost jobs, lots of them, due directly to Hayes' bad trade policies he promised to vote against before he voted for them, and he still has to drag his fat ass over there anyway for the parade and pretend like he didn't just piss on the locals' leg and tell them it's raining.

So my reporter friend had much to say about how the day played out, the most interesting of which is Hayes is in serious trouble.

Many of you have read the diaries written by Representative Brad Miller from North Carolina. You know that he gets science. You know he supports the blogging community and was part of a panel at Yearly Kos. You know he's a progressive and you probably know he's just a great guy - very honest, very smart and very genuine. What you might not know about Brad Miller is something that many of you will think is trivial, but I think is vitally important.

Have you heard the saying that 80% of success is just showing up? Well, Brad Miller shows up to vote. Every. Single. Time. He is one of only 5 representatives in the U.S. House that has bothered to show up for every single vote during the 109th Congress

Please join me below the fold...

Screwy Hoolie was alert enough to notice that MyDD had re-opened nominations for netroots endorsements and posted yesterday encouraging us to head on over. Currently, Larry Kissell leads in the comment section. That doesn't guarantee an endorsement, but it certainly shows that the excitment around his campaign is growing.

Go Now and let's give the Republicans more to worry about. Larry with netroots fundraising will send them shaking to hide back under their rocks. If you haven't left your Kissell nomination at MyDD, please do so now and send your friends too! It really will make a difference. 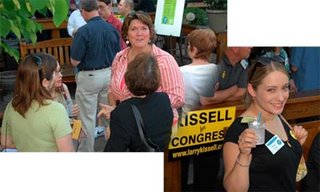 Tuesday evening was the first in a series of June fundraisers for Larry Kissell. Young Professionals for Kissell, held their first fundraiser at the Thomas Street Tavern in Charlotte's Plaza-Midwood neighborhood. The back deck provided an excellent venue for the event and the great music was provided by Autumn in August. Artist Terry Thirion offered two beautiful works of art for raffle. I failed to get a picture, but her paintings and sketches can be found at Red Sky Gallery. Pictured above are Tami V., who organized the event and Megan R., who helped Tami with the details of the event.

"I'm the son of a veteran, so earning this endorsement means the world to me," said Kissell.

The Veterans' Alliance announcement came today on the 62nd anniversary of D-Day , when more than 100,000 Allied troops stormed the beaches of Normandy in northern France and turned the tide of World War II.

"I am so honored to be endorsed by the veterans of this nation to whom we owe so much, especially on this anniversary of D-Day. We've got to do a better job taking care of our veterans," said Kissell.

Those of you who truly understand this state know this is huge news. Congratulations to Larry Kissell.

Last week BlueNC broke the exciting new poll numbers for Larry Kissell in North Carolina's 8th Congressional District. These numbers weren't released to traditional print media until the day after we had them and had printed our story. The cross-posted diaries on DKos and MyDD were noticed by national media sources and now Larry is building on that momentum.

The diaries at MyDD, DailyKos and The Southern Dem had some improvements, so I'm going to reprint that diary on the flip side. As Larry mentioned in his Thank You to us posted below, the National Journal's Hotline Blog mentioned the MyDD diary in their Blogometer posting for that day. As Lance noted in his live blog of Larry's appearance on NPR's Young Turks radio show, the interviewer mentioned seeing the diary at DailyKos.

Please join me below the fold...

Respected polling firm Anzalone Liszt Research has released a new poll for North Carolina's 8th Congressional District and Larry Kissell has tremendous momentum and is pulling away from Robin Hayes.

The number that jumps out is the informed vote where Kissell leads Hayes by 7 points. (49% Kissell/42% Hayes) The informed vote poll is taken after a paragraph about each candidate is read to the voter. These paragraphs include platform statements and are not considered a negative push.

Read the good news on the flip side...

Well, I'll be damned. Robin Hayes sure is making it easy on me. I do enjoy research and I had planned to take a look at his time in Congress and line up his votes and compare them to the influx of contributions surrounding his votes, but I didn't think I would find something so damning in the first couple of minutes of research.

On Wednesday I wrote about the stunt Hayes pulled at the gas station when he announced he would introduce legislation that would provide tax breaks to those companies who install facilities to provide E85.

It gets better below the fold...