Why the rush towards fracking? To pass it before the public learns the negative consequences.

Republican legislative leaders were able to find the votes to cancel the Democratic governor’s votoes of the 2012 budget adjustment bill, legislation to legalize fracking and an overhaul of the Racial Justice Act.
...
The gas-drilling process known as “fracking” will be authorized in North Carolina now that the General Assembly has overridden Perdue’s veto of a bill that sets rules and regulations for the form of shale gas production.

The Amendment One contest will be the target for state mandated post election audits per Don Wright at the NC State Board of Elections per an email on Friday May 11.

If you would like to volunteer to participate or observe you may contact your County Board of Elections.

Post Election Audits were mandated by state legislators in August 2005. In addition to requiring a voter verified paper ballot, the law requires random, manual hand to eye audits to check that the voting machines are counting correctly. The audits are done after the election and before the election is certified. Below is section of law regarding audits:

In order to thwart the Winston Salem Occupy Wallstreet group.

With no public notice and no public input, the Winston-Salem City Council on Monday night considered temporarily changing the city ordinance governing free speech and public assembly to prohibit such activities on City Hall grounds

This was proposed by Dan Besse, city council member, who some may remember for his campaigns for Lt Gov. 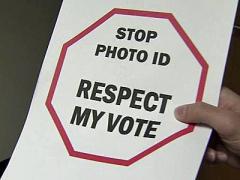 NC Lawmakers will reconsider PHOTO ID law on SUNDAY Nov 27.(that's HB 351) And other bills. There also have been rumors that fracking would be heard, but there's nothing on the calender for that on Sunday.

Incumbent Judge Cressie Thigpen had a 100,000 vote lead in the statewide IRV contest for NC Court of Appeals. He's lost that lead thanks to IRV votes and now is 6,700 votes behind. Although this was non partisan contest, voter education fell to the political parties mostly, because IRV was touted as a cost saving measure.

Correcting counting error leads to new leader in Court of Appeals race December 06, 2010
...
State elections director Gary Bartlett said Doug McCullough had a roughly 6,700-vote lead over incumbent Cressie Thigpen with counting complete in 99 of the 100 counties. The only one left – Warren County – doesn't have enough votes cast to turn the race back to Thigpen, he said.

If the race stays close, Thigpen would have until Thursday to ask for a recount.

Veteran's Day is a good day to thank the North Carolina State Board of Elections for going the extra mile to help our troops vote. Our troops relocate often and some vote from overseas, so they need more help in updating their registration records and getting a ballot. The State Board of Elections recognized that and asked the Dept of Defense for help. See the request letter below, and DoD press release later.

On Oct 8, 2009 the NC State Board of Elections sent a letter to Robert Gates, Secretary of DOD enlisting their cooperation. They joined Senator Coryn and Senator Schumer in this request. An excerpt:

We may have a voter guide, and we may have an IRV task force, but sorry, no cigar! We still do not have IRV tallying procedures as of Sept 15, 2010. And the voting vendor seems more concerned about obeying the law than anyone else.

I contacted a member of the task force set up to devise procedures, he advise me on Sept 13 that

"there are still several options on the table and I do not know at this point what method we will end up with. I think we need to spend some time testing and evaluating the options before a decision is made. Might as well do it right the first time."

The vendor worries about the legality of using our voting machines for this process. Here's excerpt from Print Elect & ES&S letter to the NC State Board of Elections dated Aug 31 2010:

And we still don't know how it will be counted.

There's a huge opportunity for legal challenges with this contest, for many reasons, because IRV has to be centrally tallied, and because of issues with counting on touchscreen ballots v certified systems and no such thing as certified IRV software that can tally a statewide contest. (more on that once procedures are announced).

Its really hard to stop misinformation once it becomes viral, even when the paper originating it later runs your op/ed correcting the misinformation. Even when I called the reporter originating the story but he wouldn't listen to what I had to say. So here's my blog on the issue with detailed documentation:

I blogged this on August 6, and my op/ed "Handle ballots with care" ran in the Raleigh N&O on August 13, the misinformation is still running in some papers today.

The NC Coalition for Verified Voting invites you to join other election integrity supporters in celebrating the fourth anniversary of the Public Confidence in Elections Law, SL 323.

Agenda
Introduction - North Carolina passed one of the strongest verified voting laws in the country four years ago.
"Legislator of the Year" award.
Guest Speaker: David Allen, member of the Joint Select Committee on Electronic Voting will speak