Hat tip to Progressive Pulse for digging up this hilarious news. Sorry to say, it's not April Fool's Day. Congratulations to the new frontpage team ... you are seriously kicking butt. Readership was up significantly last week, with more than 4700 unique visitors reported by Google Analytics. Very cool to be closing in on 5K again.

Many evangelicals have numerous reasons, other than religion, for objecting to Mr. Romney. But to understand just how hard it is for some to coalesce around his candidacy, it is important to understand the gravity of their theological qualms. 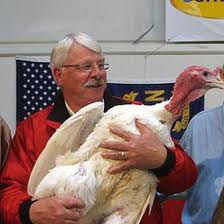 If you're a voter who wants to see public institutions destroyed through gross incompetence, law-breaking and sleaze, vote for Republican leaders. They hate government, and it shows.

A state agriculture official leaked information about a raid on a Butterball turkey farm in Hoke County last month to company officials six days before the raid, according to a search warrant released Wednesday. [snip] ... the animal rights group Mercy for Animals provided authorities with video of employees kicking and stomping birds, dragging them by their wings and necks and throwing turkeys around.