The N&O decided to weigh in on my belief that the Victims Rights Amendment would open the door to undermining abortion rights in North Carolina. Their "experts" seem to think that the amendment as proposed would be faithfully implemented by a well-meaning legislature and would have nothing to do with abortion. What the heck are those experts smoking and where can I get some?

Of all the "blank check" amendments that will be on the ballot, the one that causes the most consternation among liberals is the so-called victims rights amendment. It sounds good, right? Why not extend special rights to crime victims? Who could be against that? In fact, a number of victims rights advocates have been criticizing the VOTE AGAINST campaign because, they argue, victims are special. I don't dispute that.

We read on your website that you consider yourself an advocate for working people. You even say you are concerned about public health crises, like the opioid epidemic. So I'm writing to ask, "Why the hell are you supporting a president who will literally kill hundreds of thousands of people by allowing asbestos back into US consumer products?"

James Protzman here. I'm a founder of BlueNC. Thanks for reaching out with your comments and questions. I'll do my best to respond.

The flyer you're referring was first posted on my personal Facebook page a few days ago. I created it. I have been a vocal critic of all six amendments, and am giving away yard signs and bumper stickers encouraging people to VOTE AGAINST every amendment.

The amendments are political shenanigans that undermine the integrity of our Constitution. Each could have been handled with simple legislation; none of them are necessary. Worse still, they lack implementation language. Voters can't possibly know what the amendments will mean for the citizens of North Carolina because that won't be spelled out until after they're passed, in a lame-duck session.

The victims rights amendment, for example, leaves important questions unanswered. Just look at this language from the legislation:

"The victim or, if the victim is a minor, is legally incapacitated, or deceased, a family member, guardian, or legal custodian may assert the rights provided in this section."

So let's say you're the estranged husband of a woman who has an abortion. Under this amendment, you could assert all the rights of a family member on behalf of the fetus, and then impose the requirements of the amendment on your estranged wife. You could even assert, on behalf of the "victim," that felony murder took place.

Would this happen? Who knows? But it could. And given the willingness of Senator Berger and Speaker Moore to bend legislative rules to suit their agendas, I wouldn't bet against it.

Regarding hunting and fishing, let's say you're a gun-loving citizen of Chapel Hill. Let's also say you don't much like the town ordinance that restricts hunting inside the city limits. You sue and you win. Your rights as a hunter would protected by the NC Constitution, which must surely trump local regulations. And now that you can shoot deer in Chapel Hill, what about feral cats? Are they wildlife? Who knows? It's all up to the General Assembly to decide ... after the fact.

The Pamlico Sound was closed to shell-fishing today because of excessive bacteria in the water. That regulatory action would be prohibited if the GOP's "blank check" amendment passes. The moral of this story? Republicans would rather see you die if it means they can take NRA money.

Here's a blow-by-blow analysis of all the amendments and why they suck.

THE WON’T YOU BE MY VICTIM AMENDMENT
Victims’ rights will get extended to any class of people the legislature wants, including fetuses. This amendment will lead the way to making abortion illegal under North Carolina’s constitution.

THE KILL ALL RULES ABOUT HUNTING & FISHING AMENDMENT
Overfishing in the Pamlico Sound? Hunting with a high powered rifle in downtown Charlotte? Shooting dogs and cats? It’s all good.

Posted by @ncsbe - copy of complaint in Cooper v Berger ballot language litigation: https://t.co/MfIs6FlUm2 / and a letter from Governor Cooper’s attorneys that the motion for a TRO and other relief may be heard Tuesday in Wake Superior Court https://t.co/j8incCXtav #ncpol 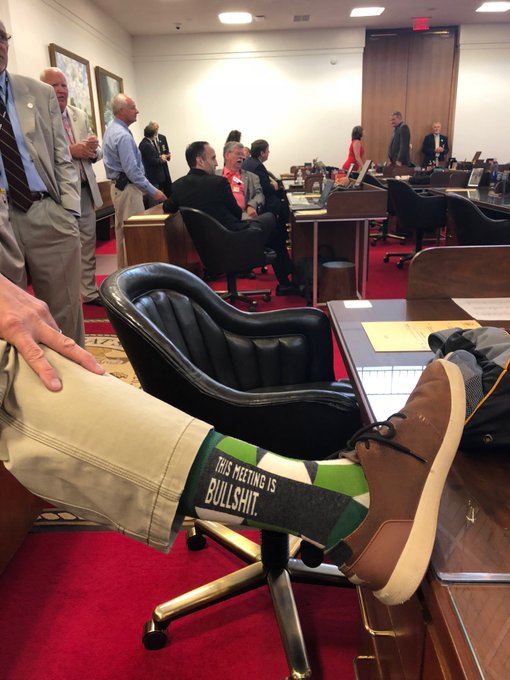