The Durham Herald Sun is featuring a story today about an uproar over a photo that emerged of a Chapel Hill police officer at the “Silent Sam” rally displaying tattoos associated with known violent white supremacist groups that took part in the massacre at Charlottesville.

You can read the Chief’s statement in the Herald Sun piece, but there’s an important point to make here: the police officer, not identified by the article or the department, was not dismissed, but told to “cover up” the tattoos.

The officer “has responded to our concerns about his tattoo. He expressed regret that his tattoo has been associated with groups that perpetuate hatred and violence.

“We understand the concerns regarding the negative interpretations of the tattoo and regret it was displayed. This will not occur again.

“We also want to emphasize that the negative interpretation of that tattoo is inconsistent with the values and mission of our department. We expect employees to abide by our values in the performance of their duties for the Town.”

Why is this police officer still employed by the Chapel Hill police department? 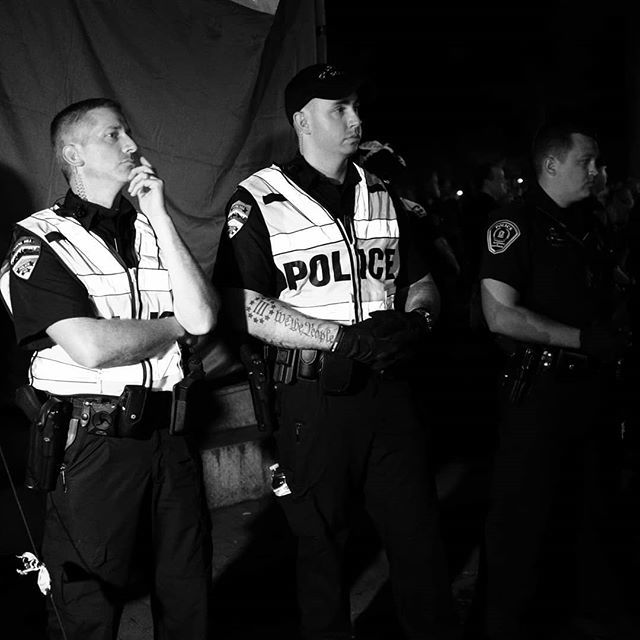 “He expressed regret that his tattoo has been associated with groups that perpetuate hatred and violence” is a perfect example of white nationalist gaslighting. It's similar to the "heritage not hate" movement that emerged about displays of the Confederate flag and monuments - it's simply a way to conceal true intentions and normalize a hate symbol to the general public.

Police departments, such as those in Chapel Hill, shouldn’t be hiring officers who display white supremicists or fascists tattoos in the first place - the meaning of these symbols is well known and trying to deny their actual meaning is simply lying. If someone doesn’t agree with these extremist racist and bigoted views, they would have these permanent skin markings removed or permanently covered up.

I would urge everyone reading this post to check out an essential video on YouTube. It runs about 25 minutes - grab a cup of coffee, get comfortable, and get educated on the tactics that white supremacists and fascists use with “normies” to operate in plain site and dupe others - like the chief of the Chapel Hill police - to allow them to continue to operate in our communities.

In the 2006 bulletin, the FBI detailed the threat of white nationalists and skinheads infiltrating police in order to disrupt investigations against fellow members and recruit other supremacists. The bulletin was released during a period of scandal for many law enforcement agencies throughout the country, including a neo-Nazi gang formed by members of the Los Angeles County Sheriff’s Department who harassed black and Latino communities. Similar investigations revealed officers and entire agencies with hate group ties in Illinois, Ohio and Texas.

Much of the bulletin has been redacted, but in it, the FBI identified white supremacists in law enforcement as a concern, because of their access to both “restricted areas vulnerable to sabotage” and elected officials or people who could be seen as “potential targets for violence.” The memo also warned of “ghost skins,” hate group members who don’t overtly display their beliefs in order to “blend into society and covertly advance white supremacist causes.”

And considering all the controversy surrounding Sam, including non-student counterprotesters "guarding" the statue, the Police Chief should have been aware of the nature of that tattoo before the damn picture was even taken.

Why are we hiring police officer with visible tattoos of any sort? It's unprofessional looking, and doesn't inspire confidence or respect.

gw bush hates the internet because Al Gore INVENTED IT!

Tattoos are a legitimate form of self expression and really came into fashion among young people in the 1990s. If you eliminated anyone with a tattoo from working with a police department, it would make the pool of candidates much smaller.

A tattoo that's a symbol of a known violent white nationalist group is quite another manner. It shows an allegiance to a certain philosophy incompatible with serving the public.

If the police officer in question denounced a group he was formerly involved in and had the tattoo permanently covered or removed, it might be acceptable. As it stands, it's no better than carrying around permanent advertising for the KKK, a violent gang, or neo-Nazism.

but when I was in the Army I held a security clearance that ranged from Secret to Top Secret (SI) levels, depending on what we were doing. I was told *any* tattoo would cause that to be revoked, so even after I got out I've refrained from getting any. Old habits...

And maybe this is a generational thing.. But maybe having higher standards professionally is a good thing. I find this recent trend toward tattoos one of the worst of my lifetime. It's very unprofessional looking. The only people that had them when I was growing up were outlaw motorcycle gangs, convicts and a handful of former military people that got them overseas.

gw bush hates the internet because Al Gore INVENTED IT!