You can't make this stuff up:

It’s now up to a judge to decide whether to accept the prosecution’s recommendation. And the judge overseeing the case has a history with Lewis, having been part of a three-judge panel that threw out redistricting plans that Lewis led the way in creating, calling them unconstitutional racial gerrymandering.

Howard wrote Wednesday that he hopes federal District Judge Max Cogburn can put that aside — and recognize that in many ways, that redistricting lawsuit was the beginning of a downward spiral for Lewis due to “the immense time and attention it mandated from David to the detriment of his health and farming interests."

Get that? It wasn't the guilt over what he had done; stripping the power away from voters to choose their representatives while also unfairly packing and cracking his Democratic colleagues. Oh no, it was being called to account for those actions that put him into a "spiral." And he also had the burden of having tons of money thrown at him:

Lying is such a complicated business, isn't it?

Rep. Darren Jackson, D-Wake, and Minority leader, said he had been informed by Rep. David Lewis, R-Harnett, that there would be no votes taken in Wednesday’s morning session. Following Tuesday’s House floor session, Lewis texted a WRAL reporter “no votes 8:30” when asked about Wednesday’s session agenda.

“I know that (Rep Jackson’s) trust in me has been shaken, but I did not have the authority to conduct no votes,” Lewis said during Wednesday afternoon’s floor session when all members at the legislature were present.

If you'll recall, Lewis started out claiming that he never told Jackson "no votes at 8:30," and then he changed it to "no mini-budget votes will be taken." But now it's "I did not have the authority." The truth is, he was a critical element in a plot to deceive Democratic lawmakers, whether he was a "knowing" element or not. And if you're wondering why Lewis would allow himself to take so much flak over this issue: He is not an attorney. But Tim Moore is, and subject to potential actions by the NC Bar Association. And the ethical implications of this stunt are wide-ranging:

"Gov. Cooper and some House Representatives were at the North Carolina National Guard September 11 Commemoration when the vote was held." #NCGOP sinking to a disgusting new low #cheaters #ncpol https://t.co/rUSThzzGrw via @ABC11_WTVD

And here's the rest of the story, showing how Republican David Lewis put his foot in his mouth while bragging how he stacked the electoral deck. 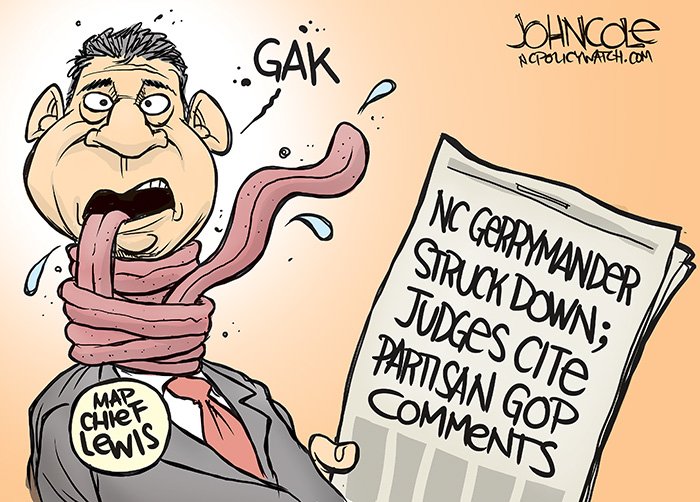 Rep. David Lewis got a lot more 'splainin' to do, Lucy:

Private contractors responsible for towing, storing and auctioning off cars seized from impaired drivers and people accused of fleeing police cannot account for 234 vehicles, valued at nearly $634,000, according to a state audit report released this week.

Under a state program, vehicles operated by drivers who were arrested for repeat driving-while-impaired offenses or speeding to elude arrest were to be seized, maintained, stored, and sold by two contractors.

You know, aside from the apparent corruption and pay-to-play politics exposed here, I have a big problem with the seizure of private property associated with *all* criminal activity, but especially something as mundane as traffic offenses, even those as disgusting as drinking and driving. The criminal justice system is punitive and costly enough as it is, and government taking private property just seems excessive, and probably unconstitutional. But that's just me. Here's the pay-to-play part:

Bob Rucho and David Lewis, two kings of slime in the General Assembly, responded last week to a News and Observer editorial call for fair redistricting. True to form, they dragged out the old canard, wondering aloud where liberals were when Democrats were doing their own gerrymandering.

Where were your scathing editorials then?